1
April Warner is one of the main characters in the first season of CBS All Access's Why Women Kill. She is portrayed by Sadie Calvano.

She is a beautiful young waitress with a free spirit. She’s a burgeoning 1960’s flower child who strikes up an unusual friendship with a 1960s housewife.

April grew up in a complicated household. Her father was a doctor, who hit her mother. She would watch her mother apply makeup to cover up her black eyes, and smear green concealer to cover the bruise, and apply a second layer to match her skin tone. Everyone in her family knew what her father was doing, but did nothing to stop it. From there, she began to look out for others and lend a helping hand to those in need.

April is a sweet and warm young woman. While at first wary upon meeting Beth Ann, who had been staring at her intensely, she immediately becomes sympathetic and worried when the latter starts to become upset. Even without knowing what's bothering Beth Ann, April is willing to set aside some time and lend an ear to a stranger.

April begins to have a relationship with Rob, a married man, and is fully aware of his marital status. Unbeknownst to April, she becomes friends with Rob’s wife, Beth Ann, who uses the alias Sheila to keep her identity a secret from the mistress.

April develops a close friendship with Beth Ann, unaware she is Rob’s wife, who is using the alias Sheila to keep her identity a secret. They first meet when Beth Ann’s friend, Sheila Mosconi, tells her to confront the waitress. Instead, Beth Ann loses her nerve and starts crying. When April gives her a tissue and offers to sit with her and talk since the diner isn’t too busy, Beth Ann befriends April under the alias Sheila. Eventually, Sheila Mosconi tells April the truth about Beth Ann. April confronts Beth Ann and Rob, before Rob is shot by Ralph Vlasin. A decade later, after resolving the affair, April becomes a singer, with Beth Ann looking after her daughter, Elsie, while she is away.

April: I want to be a singer.
Beth Ann: Really?
April: I'm gonna be somebody someday. 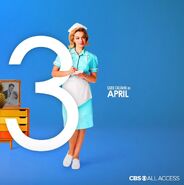 Retrieved from "https://whywomenkill.fandom.com/wiki/April_Warner?oldid=1013"
Community content is available under CC-BY-SA unless otherwise noted.