1
Eli Cohen is one of the main characters in the first season of CBS All Access's Why Women Kill. He is portrayed by Reid Scott.

Eli is Jewish, good-natured and smart enough to know that his sense of humor is the sexiest thing about him. He is a stay-at-home writer, married to Taylor, whom he finds alluring and exciting, constantly impressed by her fearlessness. He’s happy with their unconventional marriage, pleased that both have the liberty to sleep with other people as long as they don’t bring their playmates home. However, all that is about to change when Eli allows Taylor to let her lesbian lover crash with them for the weekend.

Eli is a genuinely nice and easy-going man who appreciates strong women. He's both open to compromise and needling since he's not the type who wants to argue. Unfortunately, this also leads to him being easily manipulatable.

While not exactly lacking self-confidence, as he has no problem being in an open relationship with Taylor, he still has his own self-doubts. His awareness of Taylor being the main breadwinner to the couple while he stresses over his writing leaves him feeling unappreciated and lonely, which leaves him open and vulnerable to Jade's advances.

Eli and Taylor first met at a women’s march, where Taylor was giving a speech about dismantling the patriarchy. During the entire speech, all Eli could think about was "That is one hot feminist." Taylor told Eli she was bisexual right away. They eventually got married in an open marriage, allowing them to have sexual relationships with other people. Eli loves Taylor, who has always looked out for him, especially when she had to spend two years trying to fixing Eli's life after his drug abuse and overdoses after getting him into rehab.

After everything that happened with Jade, such as her getting Eli addicted to drugs again, trying to turn Taylor and Eli against each other, and almost killing them, the two decide to stop their open marriage and decide to focus more on each other. 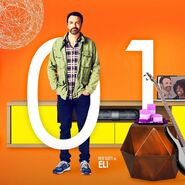 Retrieved from "https://whywomenkill.fandom.com/wiki/Eli_Cohen?oldid=1029"
Community content is available under CC-BY-SA unless otherwise noted.