I Found Out What The Secret To Murder Is: Friends. Best Friends.

Beth Ann is elated when Rob ends his affair, but that feeling is short-lived when Beth Ann learns that everything is not as she thinks. While Simone and Karl work to find common ground in their relationship, conflict ensues as Naomi grows suspicious of Tommy's erratic behavior. Eli, Taylor and Jade try to work out their issues by heading to a polyamory retreat but Eli's relapse with addiction may derail everything.[1]

Three girls sing in the background about white lies as Rob and Tommy lie about their affair while Eli lies on his addiction to drugs.

As April shares to Beth Ann that Rob had broken up with her, she and Sheila rejoices but finds April coming to their mansion. As Beth Ann hears Sheila pretending to be to April, she learns that April is still hung up about the break-up and wants to meet Rob. She decides to have April meet other men but April tells Beth Ann she's pregnant.

Beth Ann thinks that Rob might leave her for April once he knows about April's pregnancy. Sheila advises her that she should told him that she knows about his affair so that he'll choose which he should be with.

As night falls, Beth Ann prepares dinner but Rob thinks that Beth Ann might announce bad news. As she is about to tell him. Rob thinks that she might be sick. Realizing that she could have Rob back, Beth Ann lies and confirms and tells him she has cancer while Rob cries in agony.

Simone contemplates about what Karl said to her and decides to let him be with Hector and support him. Tommy gives Simone a diamond brooch and she loves it. However, the next day, Naomi, theorizes that Tommy might be taking drugs, due to the secrecy and learning that he took money from his savings in the bank.

Simone realizes that Tommy used his savings to buy her a brooch and tries to give it back to him but he refuses. The next day, Naomi hears from Tommy's friend that he was talking to a middle age woman and she thinks that he's dealing with drugs. She decides to find out if he does by looking at his journal, kept in his room.

As Simone learns this from her, she tries to stop her, fearing what Tommy might have said about their affair in his journal. She takes the journal from Naomi and opens up that Rob is gay. Shocked, the two women talk. But Tommy finds out that his mother broke into his room.

Shortly after, Tommy explains to his mother that he's trying to payback the money he spent on his savings and invites Simone to come with him on Europe on his trip. Simone decides to think it over.

Later that night, Karl looks at his bruise on his back but hides it as Simone arrives. She opens up about the brooch and Tommy inviting her to Europe. Karl tells her to accept his invitation.

Eli returns to his former addiction but Jade is having trouble keeping it a secret from Taylor. Taylor feels that she's being kept out in the relationship since that Eli and Jade have been closer. She suggests that they should go to a polyamory retreat.

However, Eli becomes agitated during the trip and accidentally spills all the cocaine in the trunk. As they arrive to their destination, Eli finds out that there has been a security check. Afraid that they might see the cocaine in the trunk, he exits and lies he wants to pee. But Taylor sees blood in his nose and finds out that he has returned to his former addiction.

Upset, she drives them back to their house. Upon returning, she forces him to go to rehab. But Lamar calls and tells Eli that the script was sold for 1.2 million dollars. They rejoice but Taylor thinks that he should be in rehab. Eli becomes angry and decides that he should have a decision for himself. Taylor leaves but Jade stays.

The singers return and continues to sing about white lies as Karl lies about his condition, Jade lies about her to Taylor, and Beth Ann lying to Rob about her cancer. 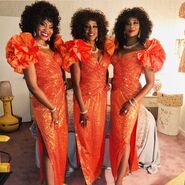 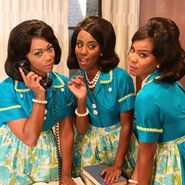 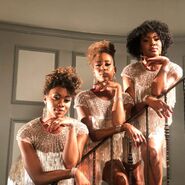 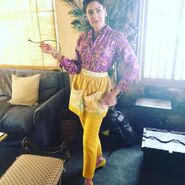 Retrieved from "https://whywomenkill.fandom.com/wiki/I_Found_Out_What_The_Secret_To_Murder_Is:_Friends._Best_Friends.?oldid=1071"
Community content is available under CC-BY-SA unless otherwise noted.