Stabbed in the stomach (by Taylor)

1
Jade (real name Irene Tabatchnick) is one of the main characters in the first season of CBS All Access's Why Women Kill. She is portrayed by Alexandra Daddario.

Jade is stunningly beautiful, also sweet, she is Taylor’s bisexual lover, extremely grateful to Taylor and Eli for letting her stay with them after being stalked by a dangerous ex. A neat freak who cleans compulsively, she impresses Eli who is thrilled to have his slacks and shirts ironed and the house kept in immaculate order. But neither Taylor nor Eli suspect that Jade may be a little vicious.

Irene is from Ohio. She was thrown out of three foster homes by the time she turned 16. The first two times were for being caught stealing money. The third time was for when her foster mother, Verna Roy, accused Irene of trying to seduce her husband. A week later, Verna and her husband’s house burned down, killing them both. Irene disappeared soon after, changing her name and moving to Pasadena.

Jade appears as a sweet, beautiful woman, with a compulsive habit for cooking and cleaning. Despite that, Jade can also be a bit crazy and controlling, and isn’t afraid to take advantage of people to get what she wants.

Jade’s ex-felon boyfriend, who started stalking Jade after he accused her of cheating on him.

Jade and Taylor first met six months ago when Jade was selling lingerie at Agent Provocateur, and Taylor was there to buy a few bras when the zipper got caught in her hair when taking the bra off. When Taylor called Jade for assistance, they ended up having sex in the fitting room. Months later, Jade calls Taylor for help when her stalking ex-boyfriend, Duke, threatens her. Taylor brings Jade home to stay with her and Eli, who starts becoming attracted to her. The three later become a throuple. 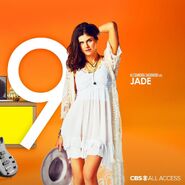 Retrieved from "https://whywomenkill.fandom.com/wiki/Jade?oldid=1098"
Community content is available under CC-BY-SA unless otherwise noted.