1
Karl Grove is one of the main characters in the first season of CBS All Access's Why Women Kill. He is portrayed by Jack Davenport.

Karl seen in 1982. He is handsome, well-bred and “endlessly amused by his wife,” Simone, whose extravagance he indulges. He knows he’s a supporting player in his wife’s life but happy to play his part. Karl is devastated and defeated when Simone uncovers a part of his life that he has kept hidden from her.

Karl is a serial adulterer who's a romantic at heart. He admires beauty, grace, and self-confidence. Personally, he is more sensitive than weak-willed even while he puts the airs of a charming, put-together man. It's less to say he has lovers and more like he does not wholly commit to one person. Becoming excited and interested in the next new person even as it whittles away and costs his own marriage to Simone.

Karl has a successful marriage with Simone, until she discovers he’s been cheating on her with other men. Despite the fact that he’s using their marriage to conceal his homosexuality, Simone still loves Karl. He puts up with her extravagance and nonsense, tells she’s beautiful when she needs to hear it most, and makes her laugh in a way that no one else can. 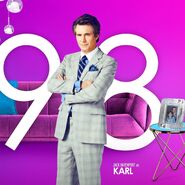 Retrieved from "https://whywomenkill.fandom.com/wiki/Karl_Grove?oldid=1020"
Community content is available under CC-BY-SA unless otherwise noted.