1
Tommy Harte is one of the recurring characters on CBS All Access' Why Women Kill. He is portrayed by Leo Howard.

Tommy is a sexy, handsome teen, about to turn 18, he is working as a waiter at one of Simone’s parties. Boyishly likable, hardworking, and with a little swagger, he is the son of one of Simone’s friends. He’s also got a mad crush on Simone.

Tommy is a teenager and is a son of Simone's best friend, Naomi Harte. Though coming from a wealthy background, he works as a servant for parties for the rich people.

He is sweet, nice and in good-nature. He is also passionate and romantic, wanting to please others to their own satisfaction. However, being in a young age, he can be emotional.

Naomi is his mother, who is friends with Simone and Karl. She is unaware of her son's relationship with Simone at the earlier episodes.

He reveals that he had a crush on her since he was 13 years old. When Karl was sent to the hospital, he comforts her and suddenly kisses her. She didn't want to have an affair with him in the beginning because of his young age but eventually gave in and their affair blossomed.

When he found out that he was having an affair with different men, the only emotion he felt for him is anger and resentment. 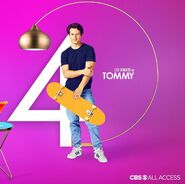 Retrieved from "https://whywomenkill.fandom.com/wiki/Tommy_Harte?oldid=1112"
Community content is available under CC-BY-SA unless otherwise noted.